This is the 15-turn-version of the Second Battle of El Alamein (the impossible German defence).

Historical background: In the summer of 1942 Axis forces operating in North Africa ran out of steam in front of El Alamein while trying to advance into Egypt and seize control of Suez Canal. Chronically lacking fuel due to overstretched supply lines and Allied control of Mediterranean sea, the only thing Germans and Italians could do was to deploy minefields and brace themselves for the inevitable British offensive. Commander of the British 8th Army, Montgomery, resisted calls from impatient Churchill to attack, and instead relentlessly kept stockpiling huge amount of resources, eventually vastly overpowering Axis forces in every possible way. Rommel knew that the lack of fuel meant that he could not do any grand maneuvering, his one defensive counter-strike with armored divisions had to be decisive to stop the Allied attack and prevent the total collapse of Axis position in North Africa.

+ Thanks to in-built variation and the game’s smart AI technology, each game provides a unique war gaming experience.

+ Challenging: Crush the opponent quickly and seize the top spot on the Hall of Fame.

+ Multi-layered AI: Instead of just attacking on direct line towards the target, the AI opponent balances between strategic goals and smaller tasks like encircling nearby units.

In order to be a victorious commander, you must learn to coordinate your attacks in two ways. First, as adjacent units give support to an attacking unit, keep your units in groups in order to gain local superiority. Secondly, it is rarely the best idea to use brute force when it is possible to encircle the enemy and cut off its supply lines instead.

If you want to test this WWII game a full version is also available.

Join your fellow board game generals in changing the course of this classic WWII scenario.

Conflict-Series by Joni Nuutinen has offered highly rated Android-only strategy board games since 2011, and even the first scenarios are still actively updated. The campaigns are based on the time-tested gaming mechanics TBS (turn-based strategy) enthusiasts are familiar with from both the classic PC war games and legendary tabletop board games. I want to thank the fans for all the well thought-out suggestions over the years which have allowed these campaigns to improve at a much higher rate than what any solo indie developer could dream of. If you have feedback about this board game series please use email, this way we can have a constructive back and forth chat without the limits of the store’s comment system. In addition, because I have huge number of projects on multiple stores, it’s just not sensible to spend handful of hours each day going through hundreds of pages spread all over the Internet to see if there is a question somewhere — just send me an email and I will get back to you. Thanks for understanding!
v1.4.8
+ Setting: Turn Mortars ON-OFF
+ New lighter sea-water hexagon icon
+ Unit Tally includes separately HPs lost by bombardment-barrage
+ Removed Confirm Ending Turn dialog ON-OFF setting
+ Bigger flags on units
v1.4.6
+ Setting: Show minimap during AI movement phase ON/OFF
+ Relocated 4 settings (Unit History, Shorten Nearby text, Shorten War Status, Text Variation) to Settings View (Main) 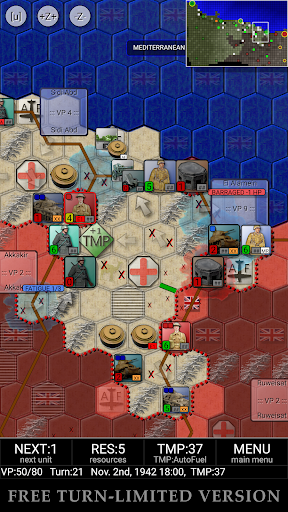 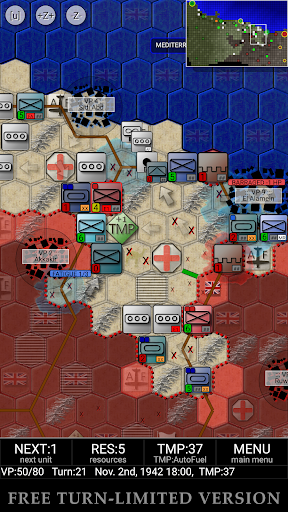 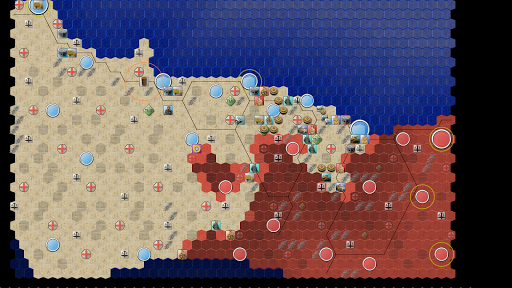 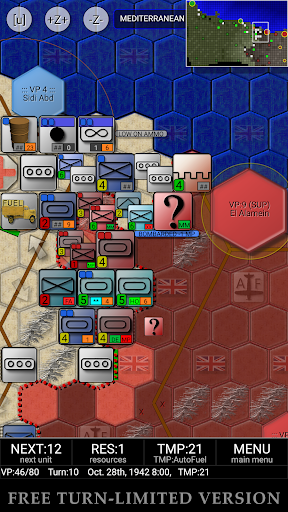 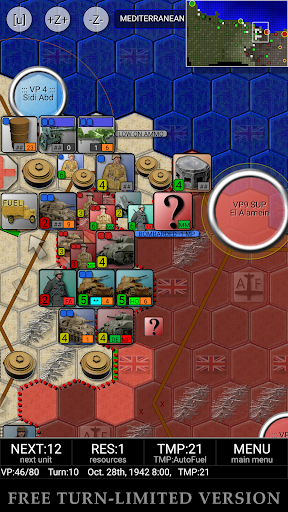